Whilst Michael Jordan’s playing days are finished, his collectable cards are continuing to break records. Whether you’re building a collection or just wanting to know the value of his cards, this round-up list will take you through the ones that are worth a fortune.

In this guide, I’ll take you through the different Micheal Jordan cards value, what to look for when buying one and where to buy them. 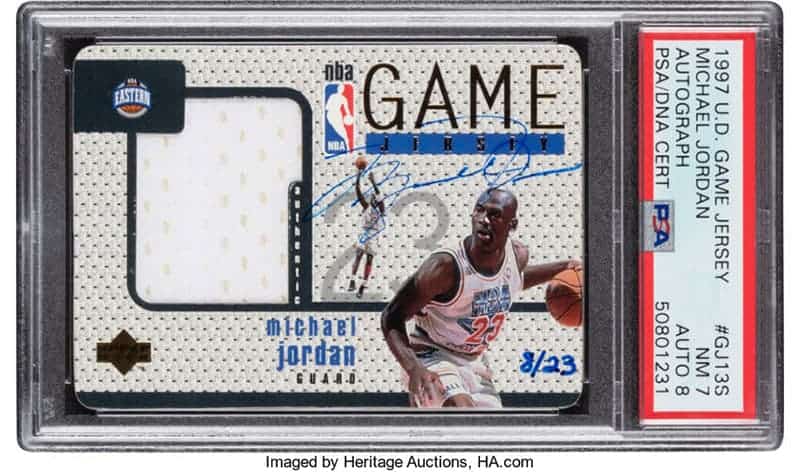 Currently the most valuable Michael Jordan card sold to date, this 1997 PSA 7 was sold for over $1.4 million in February 2021.

It features a sizable sample of the jersey MJ wore in the 1992 NBA All-star game played in Orlando, Florida in front of 14,000 fans. Michael led the scoring for the East with 18 points and 5 assists. This was also the last game played by Hall of Famer James Worthy and fellow Laker Magic Johnson.

The card also features an autograph by Jordan in a thin blue marker, graded as PSA/DNA Auto 8. 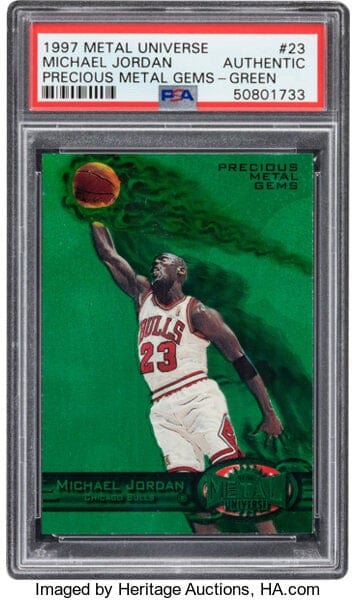 The card was sold shortly after the release of the 10-part Netflix special titled ‘The Last Dance’. The documentary examined the history of MJ and reignited people’s love and appreciation for his career at a time when professional sports were canceled across the world.

The 1997 Metal Universe card represents the first of the metal gems cards, issued alongside the set’s base cards. Only 100 were produced for each player, with 90/100 made with red foil meaning only 10 were tinted green.

Of these 10 cards, 6 were given to PSA to review, with this card 1 of only 2 graded as Authentic. 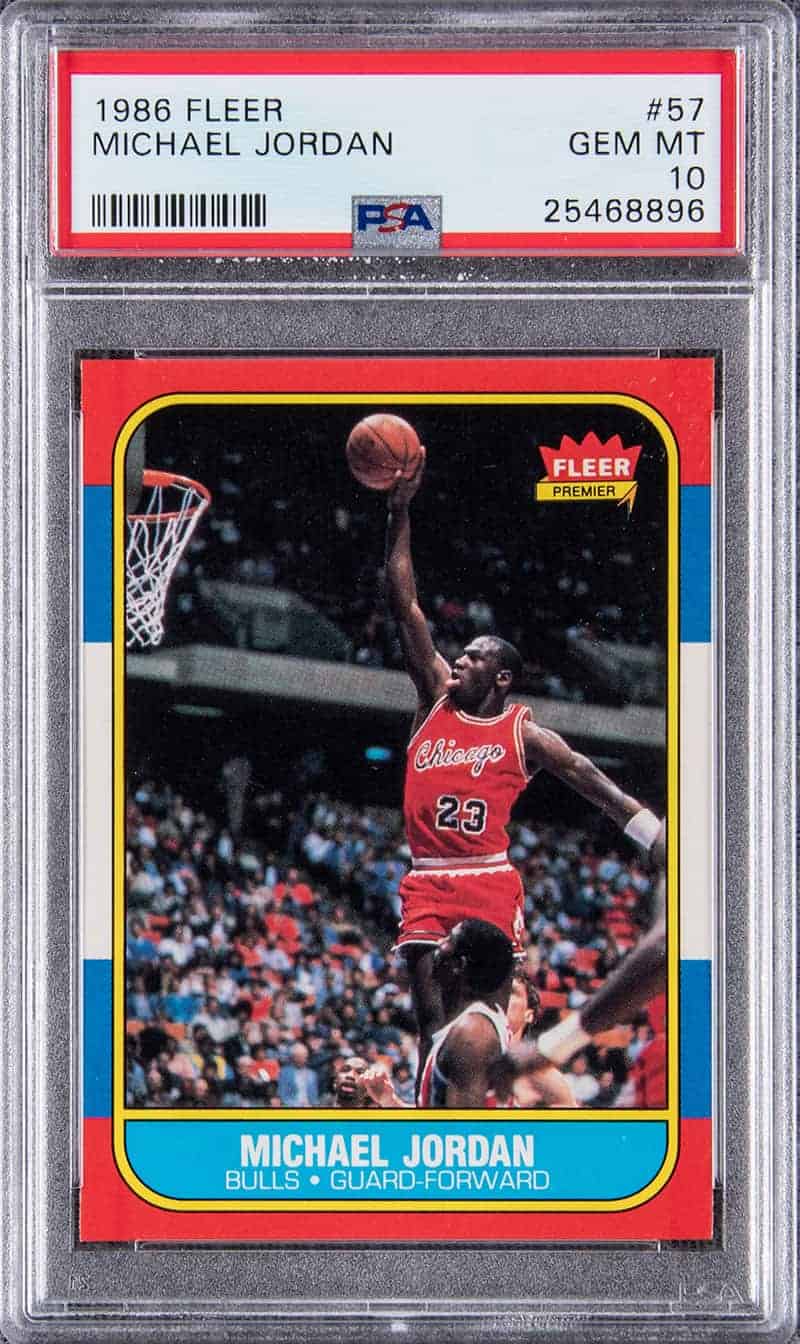 The fifty-seventh card of the 1986 Fleer Basketball run is one of the most popular basketball cards produced. Condition is the main factor that determines the card’s value, with 315 PSA Gem Mint 10 card examples existing.

This means the card is in perfect condition, with never touched edges and corners and no marks. The perfect 10 PSA score has only been given to less than 2% of all examples validated by PSA, making this example of the card extremely rare. 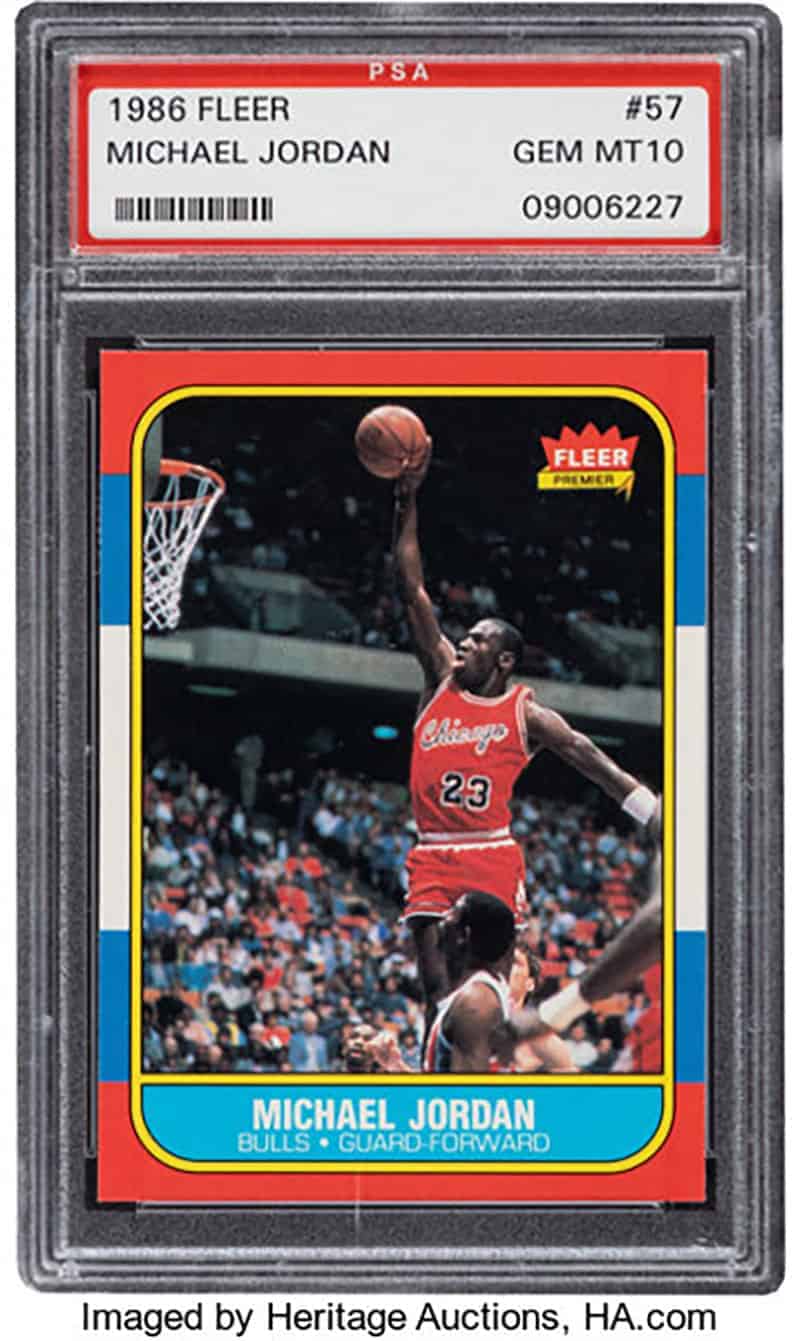 This is another excellent example of the 1986 Michael Jordan rookie card sold for $720,000 in the number 3 spot. 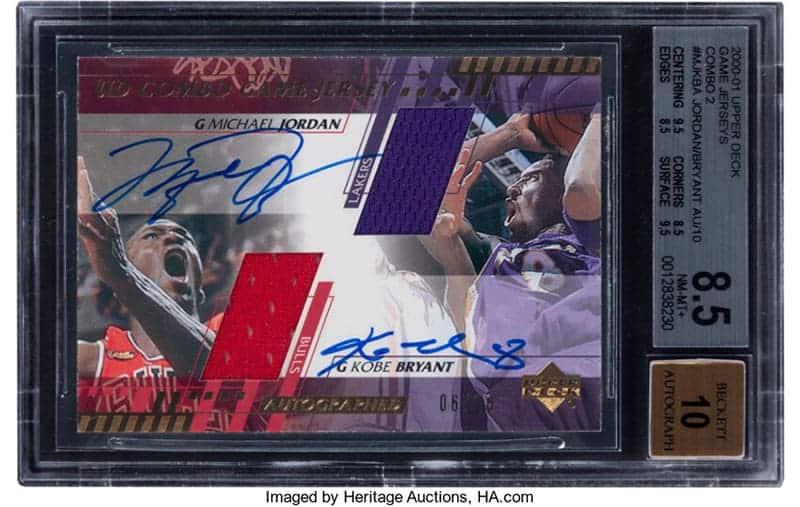 Featuring Both Micheal Jordan and Kobe Bryant, two of the most well-known names in basketball, this card sold for $516,000 in April 2021.

This dual-swatch autograph card was the first one signed by both MJ and Bryant, making it a valuable addition to any collection. The death of Bryant in 2020 coupled with the Netflix documentary examining MJ’s illustrious career only further increased the card’s value. 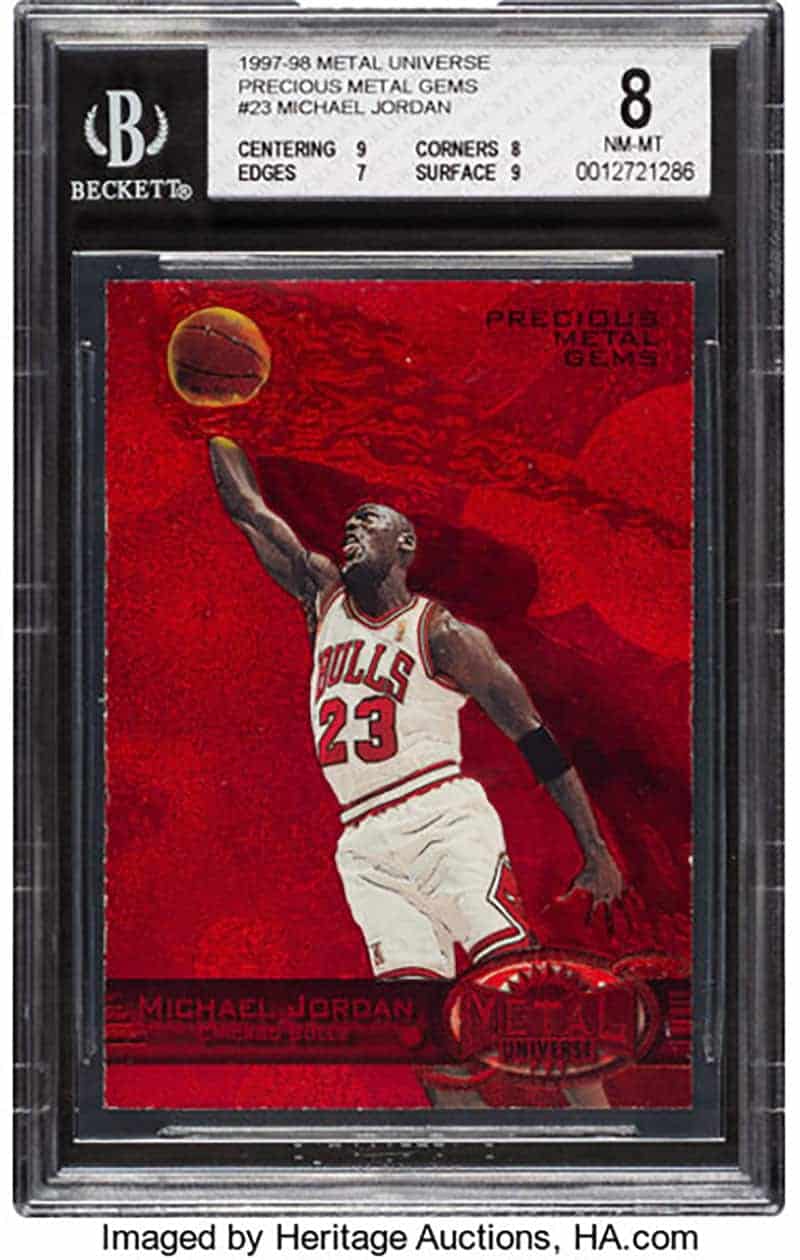 Precious Metal Gems cards are highly sought after. Only 100 of each card were produced, with only 90 of them having the red foil background.

Only 31 of these cards have been presented to Beckett for grading, making them highly desirable to collectors. 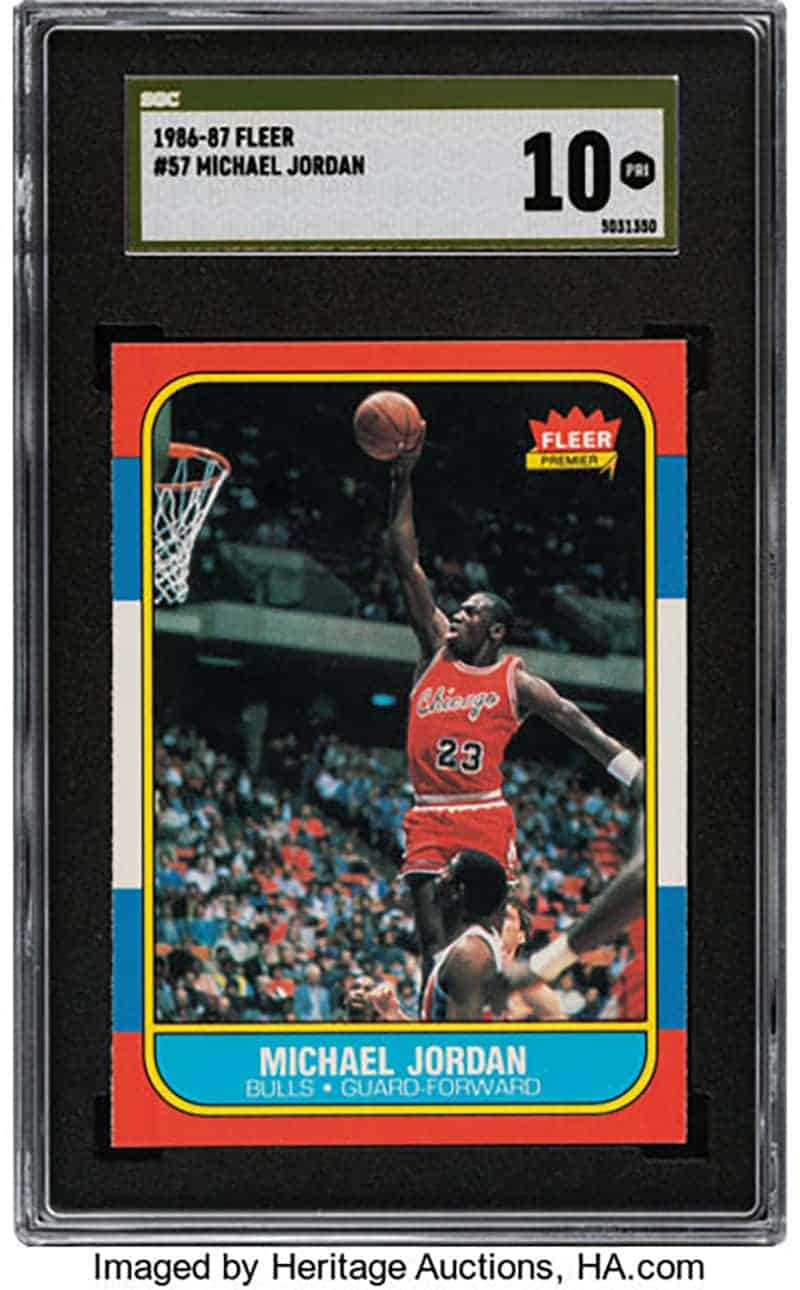 This 1986 Fleer Michael Jordan Rookie Card is the only SGC gold label example out of more than 2000 submissions, with a ‘Pristine 10’ label.

The card features MJ dunking with his tongue out and is the last example of a collectible standard issue card before overproduction started to reduce card values. 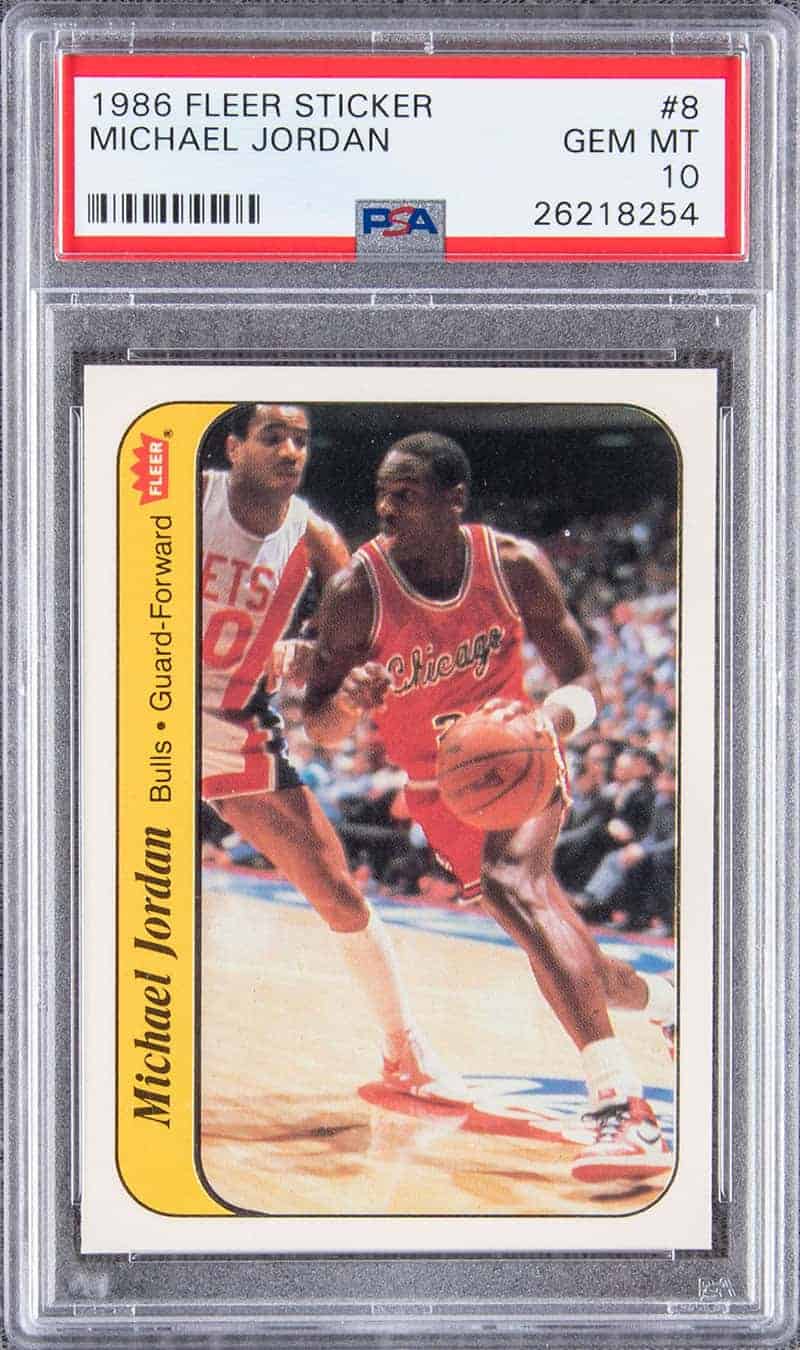 Substantially fewer examples of this card exist compared with the #57 higher profile cards.

This was reflected well when the card sold for $216,000 in February 2021, making it one of the most valuable cards sold. 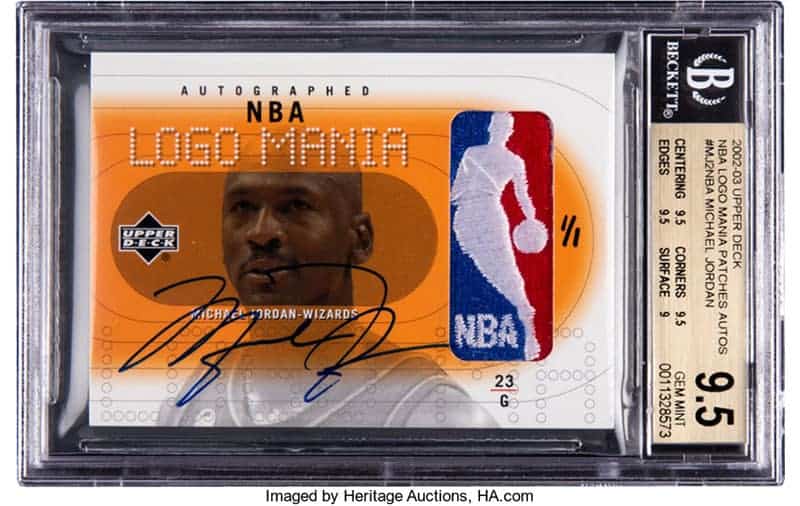 The card has a Gem Mint 9.5 grade and a perfect 10 for the autograph, making it a great addition to any collection. 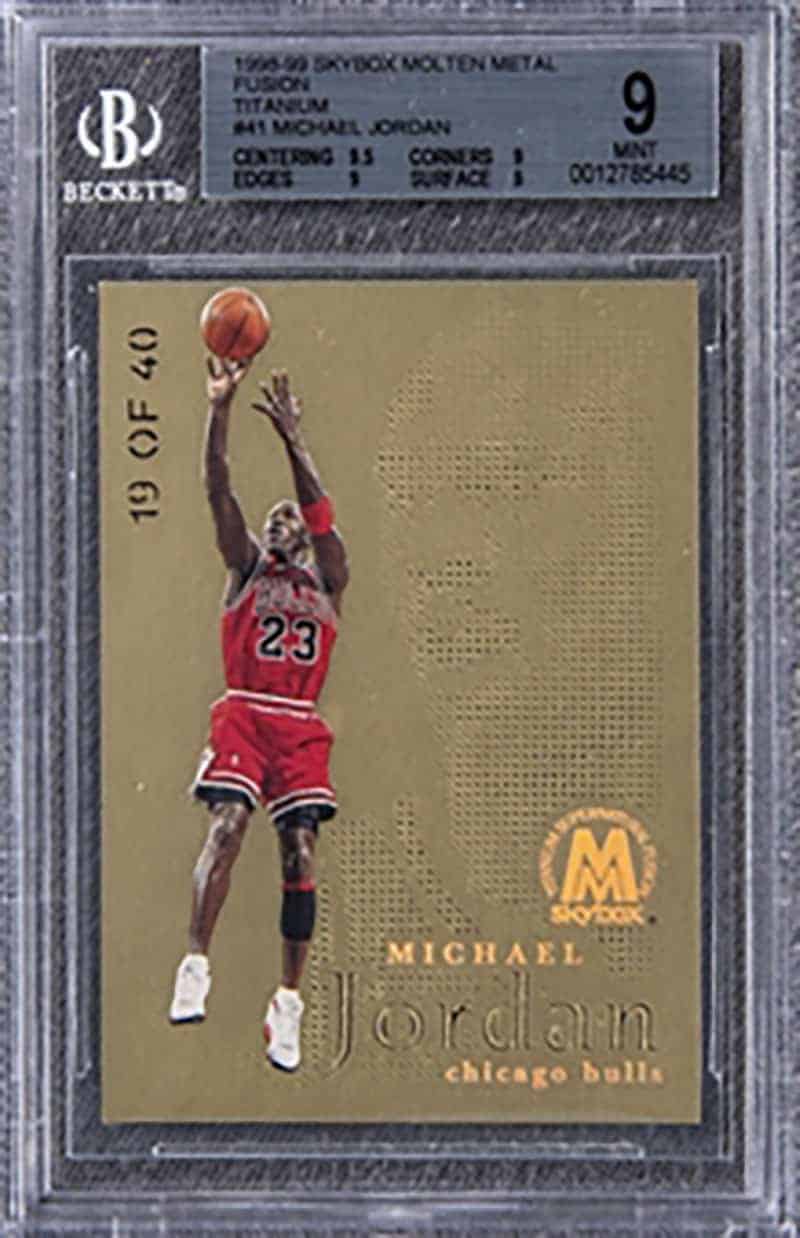 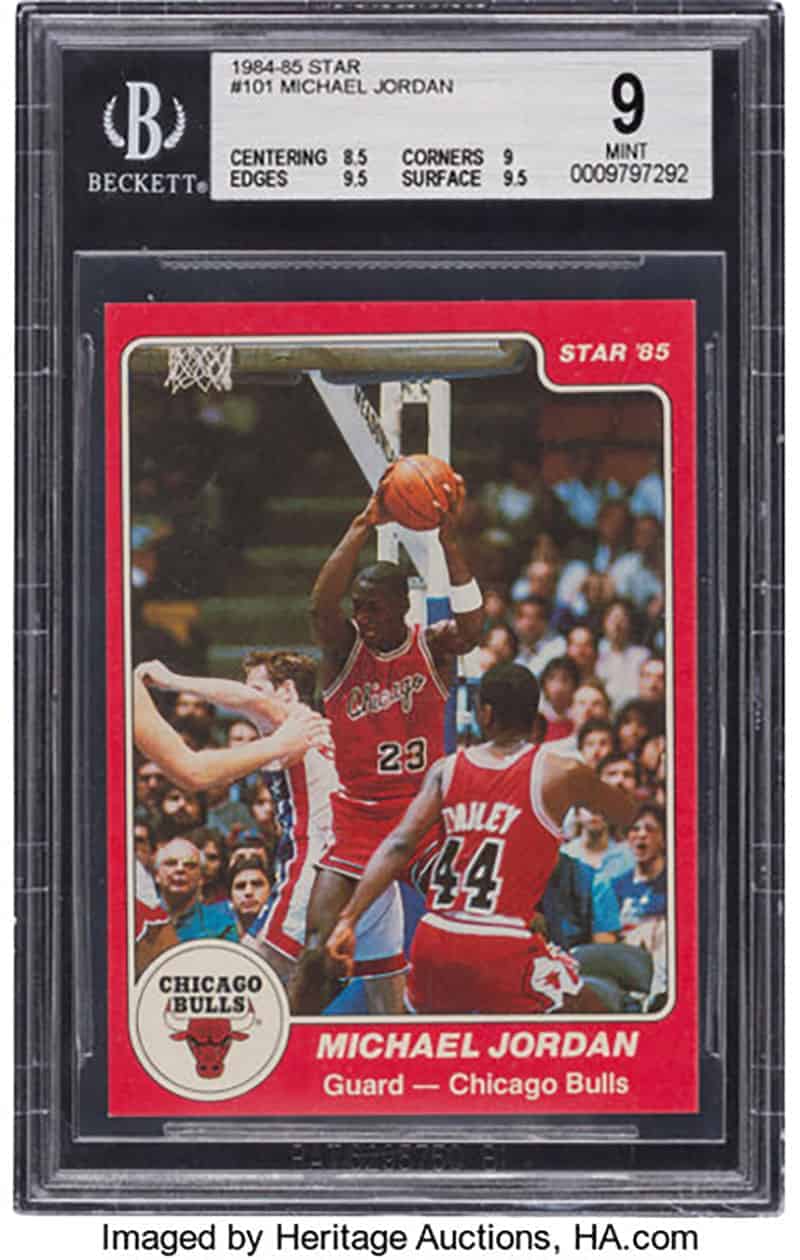 Due to the lack of playing data at that time, the card features MJ’s college stats on the back. Whilst approximately 5000 of these cards exist, only 3 have been rated higher by Beckett.

The cards were originally distributed in sealed team bags with Jordan at the top. This particular card is graded BGS Mint 9 by the Beckett grading system. 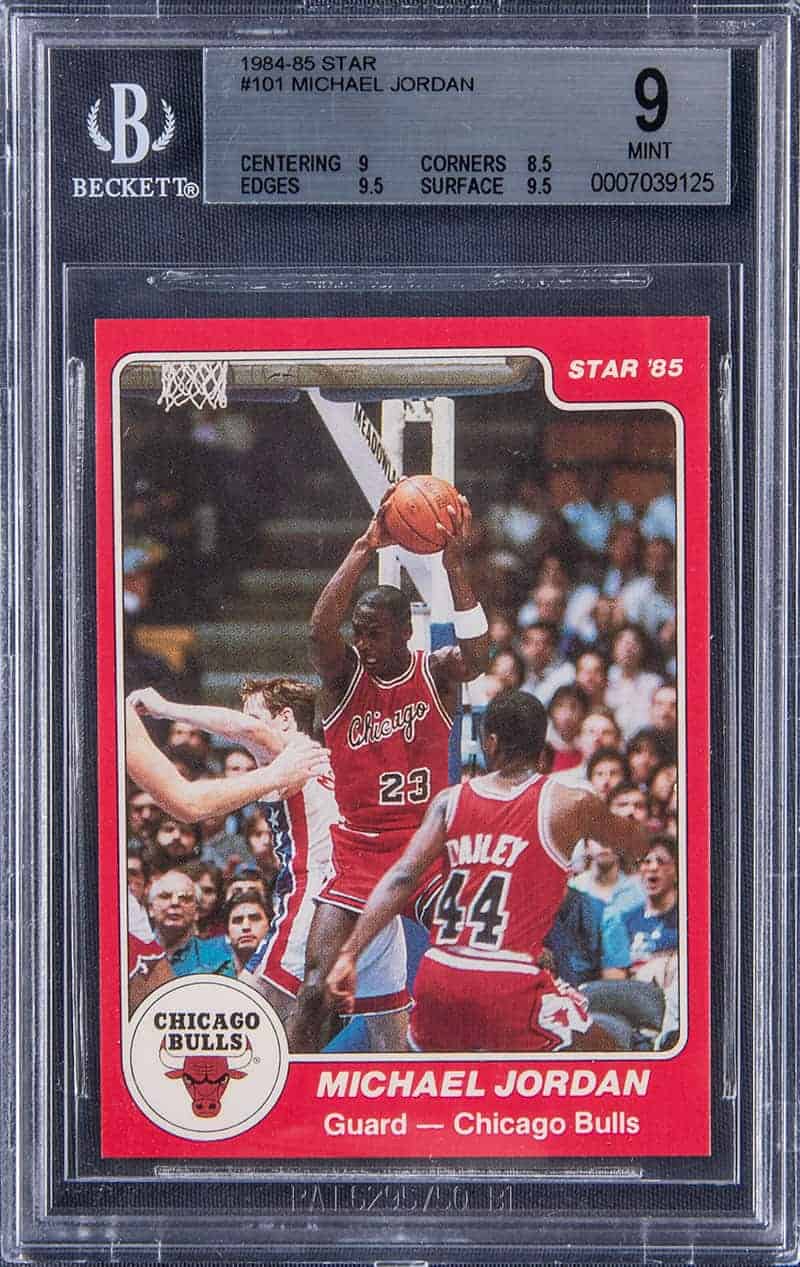 Due to no professional statistics available at the time, the card features stats from his time with the Tarheels. Only 5000 of these cards were produced, with 900 presented to Beckett for grading. 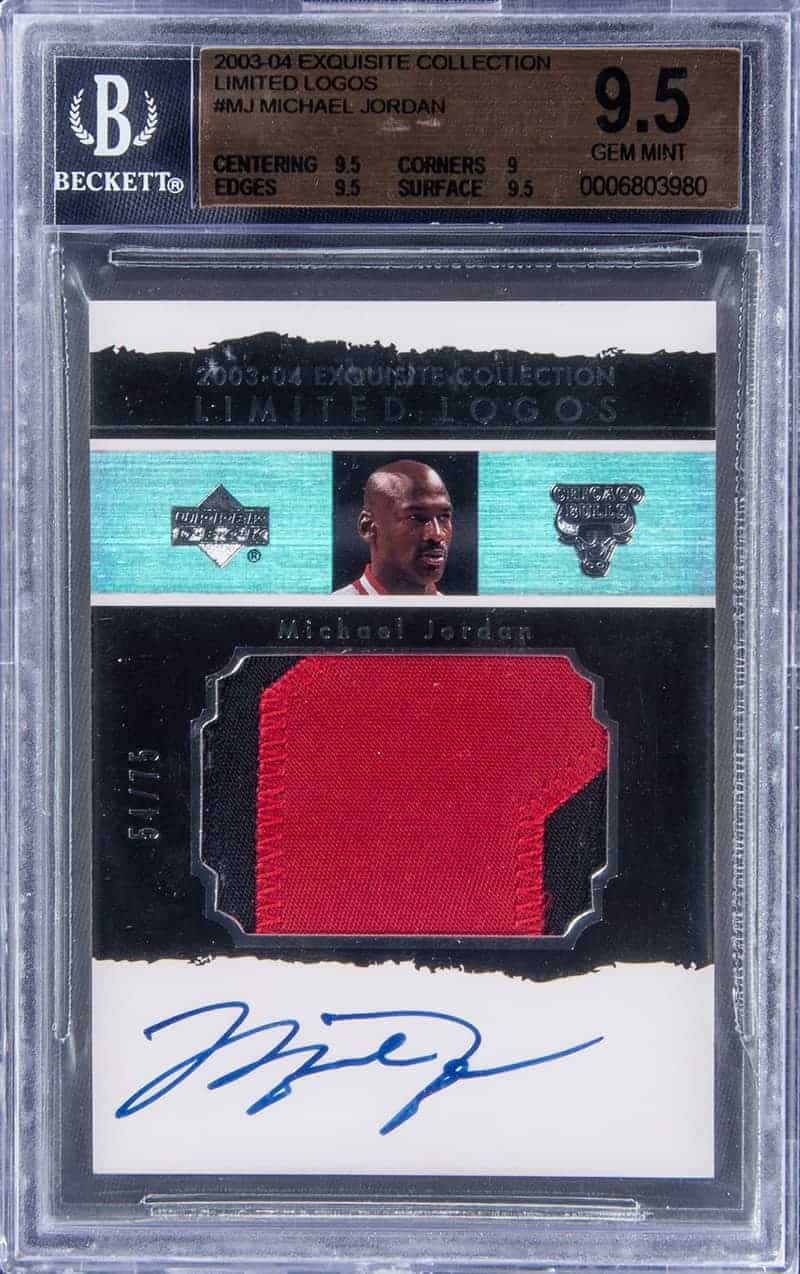 This Upper Deck ‘Exquisite Collection’ Limited Logos Collectable Card features a game-used Patch from an NBA jersey worn by Jordan and a blue ink signature underneath.

The card was graded as Gem Mint 9.5 by BGS and 10 for the autograph. 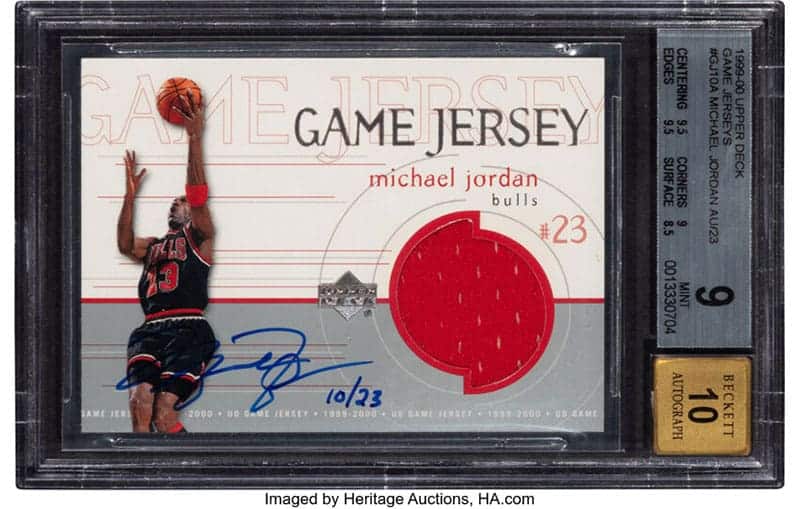 This card was issued just after MJ had finished with the Chicago Bulls and was yet to start with the Wizards. The card is a redemption card that was only available via mail.

It features his autograph in blue ink and an NBA game jersey patch. The card has the handwritten serial number 10/23 and is graded as BGS Mint 9 and autograph 10. 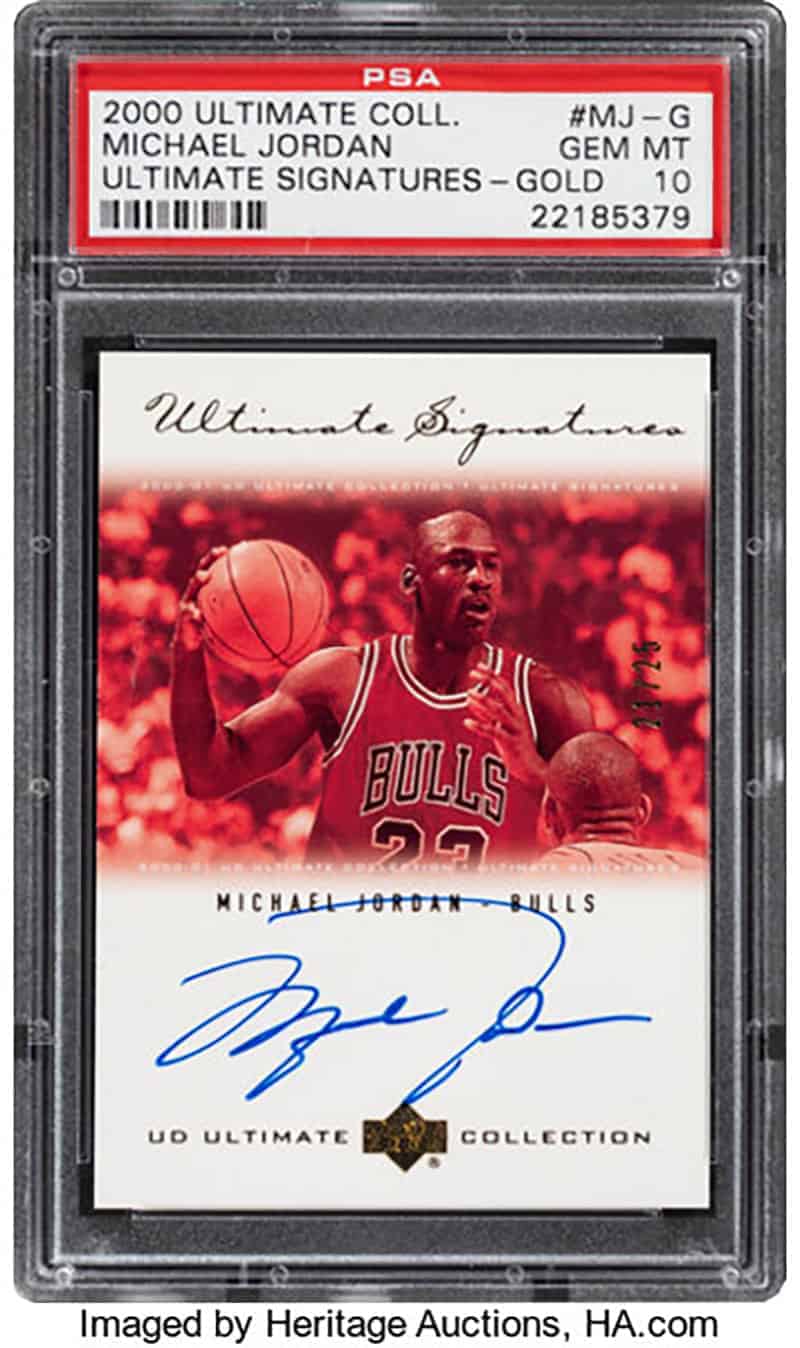 Last on my list of the most valuable Michael Jordan cards sold at over $100,000 is the 2000 Ultimate Collection MJ Ultimate Signatures Gold card.

Only twenty-five of these cards were placed into upper deck packs which featured MJ, Kobe, and Kevin Garnett.

The card was released the year before MJ played for the Washington Wizards, making it one of the last cards featuring Jordan in a Chicago Bulls uniform.

The card is graded PSA Gem Mint 10 and features Jordan’s signature in blue ink and a 21/25 stamped serial number.

Why are Michael Jordan Cards so Expensive?

Michael Jordan is widely regarded as one of the greatest basketball players of all time, earning a record of 6 championship rings, 5 MVP awards, and 10 scoring titles.

After retiring in 1999, MJ became a cultural icon, leaving people in awe of his playing capabilities and records broken during his playing career.

This made him one of the most marketed sports figures ever, with his merchandise and memorabilia highly sought after.

In 2020, Netflix’s ‘The Last Dance’ documentary examined MJ’s career and the Chicago Bull’s rocky 1997 season. This coupled with the cancellation of professional sports games due to the Coronavirus pandemic, reignited people’s interest in MJ collectibles and trading cards.

If your looking to buy your own Michael Jordan Basketball card or just what to know what to look out for, make sure to consider these factors

With so many valuable MJ cards now available to buy, it’s common that counterfeit cards also appear. It’s important to have an expert authenticate a card before buying.

Some counterfeit cards are easy to spot whilst others are more difficult, Fake ones often lack a white border and jagged bottom edge. Alongside getting an expert to authenticate the card, consider these factors.

Card condition is vital when determining the price. With graded cards, it’s fairly simple to see the condition as the hard work has already been done but there are still some key points to take into account.

With ungraded cards, it can be much harder to determine the condition, especially online.

Michael Jordan cards are commonly graded by 2 companies, Professional Sports Authenticator (PSA) and Beckett Grading System (BGS). When comparing PSA to BGS, equal grades typically go for more when graded by PSA. This is due to the proven success of PSA and the fact they were grading cards first.

Beckett is commonly known to be a tougher grader and their color-coded slabs do look more aesthetically pleasing, but PSA-graded cards still seem to sell for more.

Buying a card raw before getting it graded is becoming increasingly popular. If your card is graded at a high PSA or BGS, you’re likely to earn far more money than buying the card already graded. This requires an element of luck and might not always be a good idea unless you’re an experienced collector.

As I mentioned earlier, counterfeiting is extremely common, especially with the huge values Michael Jordan cards are now fetching.

You can check for authenticity in many ways, but the most common one is to do a visual inspection. Fake cards often have slightly different colors or can be printed on different types of cards. They may also be less detailed and lack a white border or jagged bottom edge.

If you’re unsure of how to authenticate your card, consult an expert or experienced collector.

Make sure to consider the market before making a final decision on whether to invest in a Michael Jordan card.

As the cards mentioned above are no longer being produced, it stands to reason that the cards should keep going up in value as demand keeps outweighing supply.

Where to buy and sell Michael Jordan Cards

There are plenty of places online or offline that frequently buy and sell Michael Jordan cards. Here is a selection of the most popular sites and places.

Michael Jordan basketball cards are some of the most expensive sports cards ever sold. His rookie cards seem to be the most valuable but other cards including NBA game jersey patches and autographs also highlight different points in his career, making them extremely valuable.

The 1997 Michael Jordan Upper Deck Game Jersey (Autograph) sold by Heritage auctions reached $1,440,000 and is the most expensive card sold to date.

How many Michael Jordan cards exist?

Should I get my Jordan Rookie graded?

If your card has 4 good corners and no print marks, it has a good chance of getting a high grade. If you have an ungraded rookie and you’re thinking of selling it, it’s worth getting it graded.

How much does it cost to get a card graded?

Reprint cards offer an affordable way to collect your dream cards. Whilst the original sets may be worth thousands, reprints are often a fraction of the cost.

Collecting sports cards is a great way for sports fans to keep engaged with their favorite sports…. 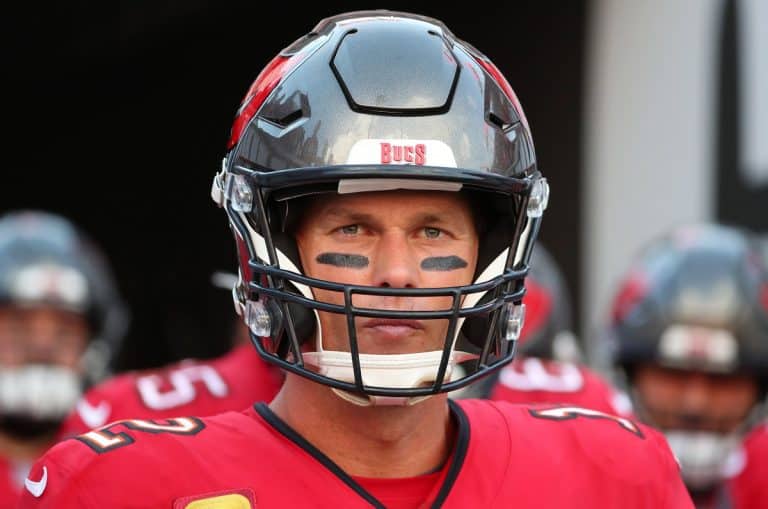 Collecting sports cards continues to be an enjoyable hobby among enthusiastic collectors. Whilst some fans enjoy watching… 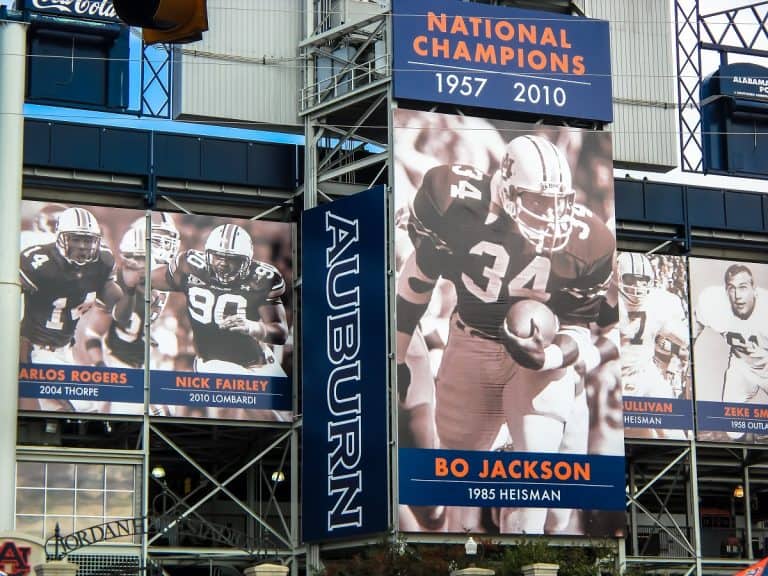 If you’re going through your old sports trading cards at home, you might be sitting on a… 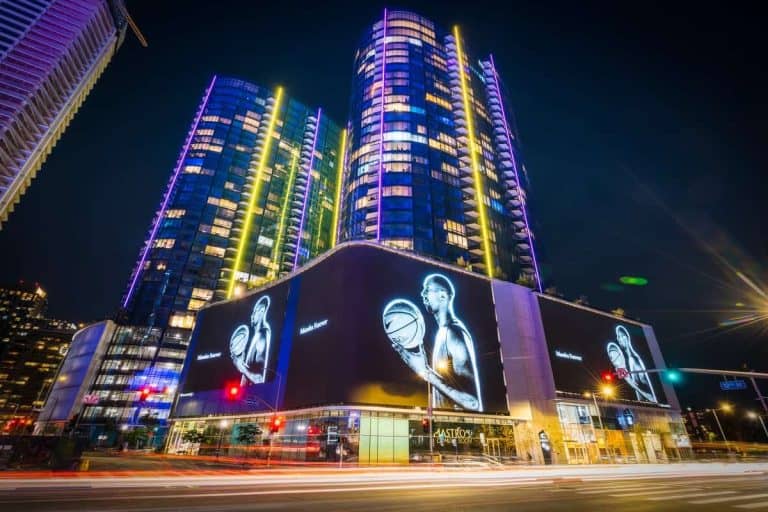 When it comes to the world of sports cards, basketball cards are some of the most sought-after… 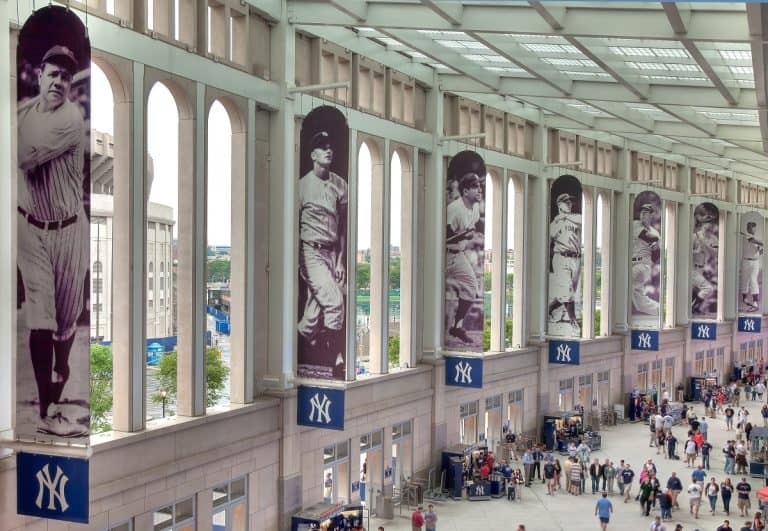 Whilst most hobbies seem to come and go, sports card collecting is here to stay. The industry… 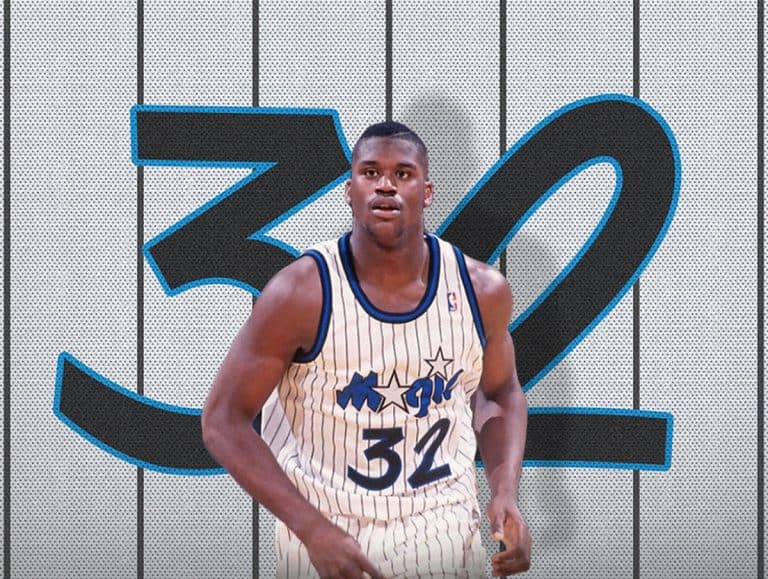